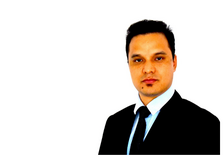 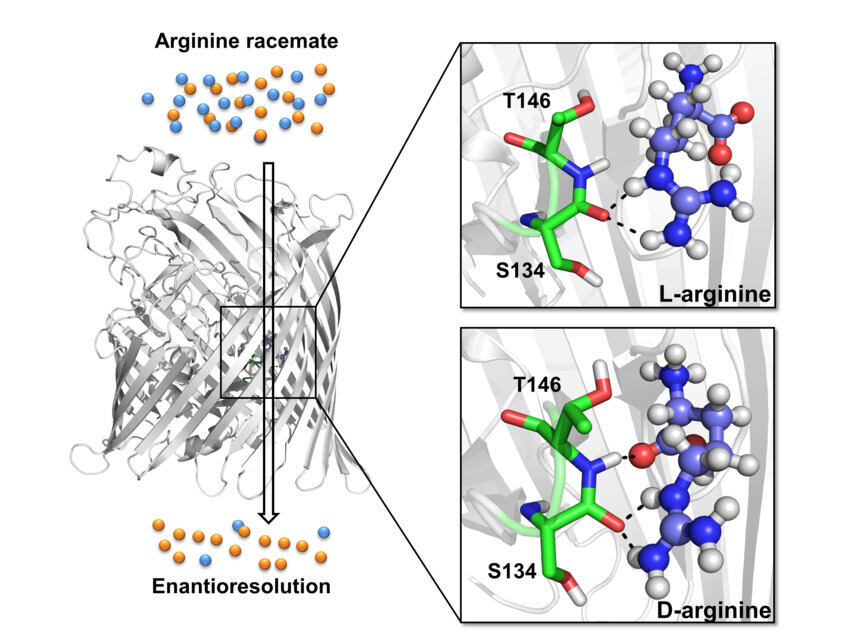 Chiral molecules are of large economic value in chemical, pharmaceutical, and food industries. Separation of enantiomers can be achieved by various methods but it still remains a challenging task. Chiral protein-polymer membranes would be an attractive, cost-effective, and scalable alternative for chiral separation. The main challenges lie in the design of filter regions within the channel proteins and the development of screening systems to identify chiral channel protein variants. In the present study, we report for the first time a chiral β-barrel channel based on ferric hydroxamate uptake component A – FhuA, an outer membrane protein of E. coli. Two filter regions were identified and redesigned through screening of multi-site saturation mutagenesis libraries, in order to achieve the chiral separation of a D-/L-arginine racemate. Screening resulted in identification of FhuAF4 variant showing an improved enantiomeric excess of 24% at 52% conversion compared to the parent FhuA variant. Interestingly, even a subtle change of just two amino acids considerably influenced the selectivity of the FhuA channel. Steered molecular dynamic simulations indicated that the separation is based on diffusivity differences of two enantiomers through FhuAF4. It is likely that with the identified filter region and multi-site saturation libraries further improvements are achievable for separation of other amino acids and a broader range of enantiomers. The chiral FhuA channel proteins would be an excellent scaffold for generation of chiral membranes based on protein-polymer conjugates with a high potential for novel and scalable downstream processes.

We kindly acknowledge the German Federal Ministry of Education and Research (BMBF) for providing financial support to the Chiral Membranes I project. Simulations were performed with computing resources granted by JARA-HPC from RWTH Aachen University under the project RWTH0116.