You Are Here: Chiral Membranes I

Fundamental technologies for the next generation of biotechnological processes 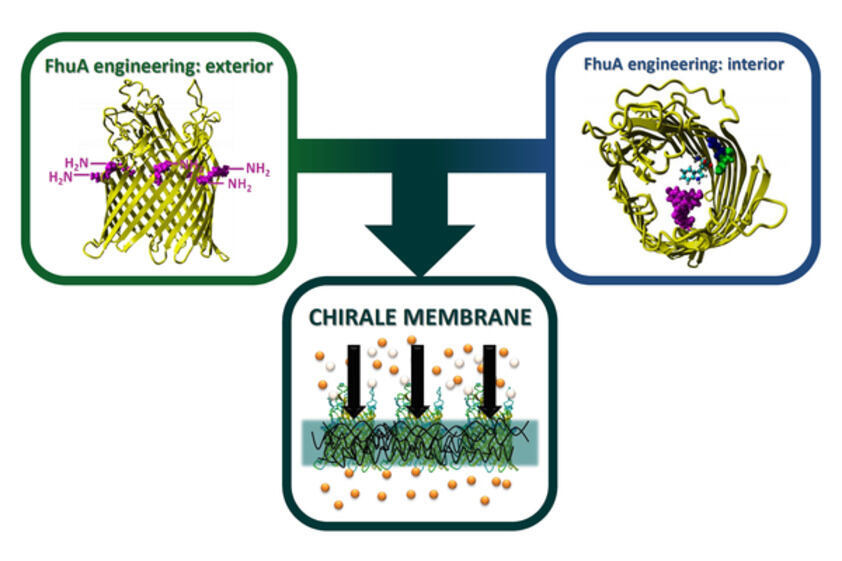 In all organisms , ions and chiral compounds are selectively transported through membranes by channel proteins . Chiral compounds are molecules of identical shape , size and charge that only structurally differ in the orientation of at least one molecule residue . The goal of the tandem project " Chiral membranes " of the Schwaneberg group at RWTH Aachen and the Böker work group at IAP Fraunhofer Potsdam is to synthesize membranes from protein building blocks which can enable a separation of enantiomer mixtures . These membranes will lead to the generation of a novel biotechnological technique for the separation and downstream processing of compounds. This work is conducted by members of our Hybrid Catalysis & High Throughput Screening division.

Chiral Separation with the help of tailored FhuA channel proteins

As a biological component , variants of the iron transporting protein „ ferric hydroxamate uptake protein component A“ - FhuA - will be produced with two parallel strategies . FhuA is a β-barrel shaped transmembrane protein located in the outer membrane of E . coli . The strategies will apply a FhuA channel protein with either a " closed " or " open" channel , respectively . Both strategies aim at modifiying the interior of the channel in a way that enables the chiral separation of two enantiomers , in the case of this project two enantiomeric amino acids .

Anchoring a channel into a membrane

A further target of the project is the engineering of FhuA channel`s surface towards an improved conjugation of polymer chains . These chains will be grafted from discretely postioned lysine residues that are arranged in plane orientation explicitely at the outer surface . The FhuA-polymer conjugates then serve as a starting point for the synthesis of FhuA-polymer membranes . Combining both approaches of interior and exterior protein engineering will finally provide a FhuA-polymer membrane capable of separating enanatiomeric amino acid mixtures .

Please feel free to check a report on this project at the Bioökonomie.de website - article in German language -.