You Are Here: Chiral Membranes II

In nature, ions and chiral compounds are selectively transported through biological membranes via channel proteins. Chiral compounds are molecules which have the same size, shape and charge and differ only structurally in the orientation of at least one molecular residue.

In the BMBF-funded project – Chiral Membranes, November 2012 to January 2018, from the Initiative Next Generation of Biotechnological Processes, Biotechnology 2020+ – fundamental results for the generation of protein-polymer membranes were obtained. Furthermore, the enantiopreference of the channel protein was successfully altered. The chiral membrane project was performed in a tandem team consisting of our group as project coordinator and the group of Prof. Dr. Alexander Böker – Fraunhofer IAP Potsdam.

The aim of this tandem project was to synthesize membranes from protein building blocks in order to achieve a chiral separation of enantiomeric mixtures, thus enabling substance separation and reprocessing via novel biotechnological processes.

Results of project Chiral Membranes I are paving the way

An iron transport membrane protein, the ferric hydroxamate uptake protein component A, FhuA, is a transmembrane protein in a β-barrel structure from the outer membrane of Escherichia coli. Two parallel strategies of engineered FhuA variants were applied: either a closed channel or an open channel was used. In both strategies, the goal was to modify the channel interior making chiral separation of two enantiomers possible. Another goal is the engineering of the outer surface of the FhuA channel to allow efficient conjugation of polymer chains. Based on lysine residues, which are precisely positioned in one plane at the outer surface of the FhuA-channel, polymer chains can grow starting from FhuA.

The prepared FhuA polymer conjugates were subsequently used to synthesize FhuA-polymer membranes. After combining both approaches of protein engineering, both inside and outside of the β-barrel, the ability to separate enantiomeric mixtures of the generated FhuA-polymer membranes was investigated.

The project’s aims of the first phase were met to the utmost satisfaction. It was possible to produce and characterize channel-protein membranes with defined monodisperse pores and to modify the preference of the channel protein for enantiomers by protein engineering. The Schwaneberg group now continues to further investigate the preparation of membranes that can separate chiral molecules.

From Proof of Concept towards a channel-protein membrane: Project Chiral Membranes II

Based on the results achieved from the first funding phase for engineering and expression of channel protein FhuA, the aim of the follow-up project, Chiral Membranes II, which started in Feb. 2018, is to develop a production technology of channel-protein membranes in large-scale together with our tandem partner Böker group. The long-term goal is the development of a biotechnological separation process. 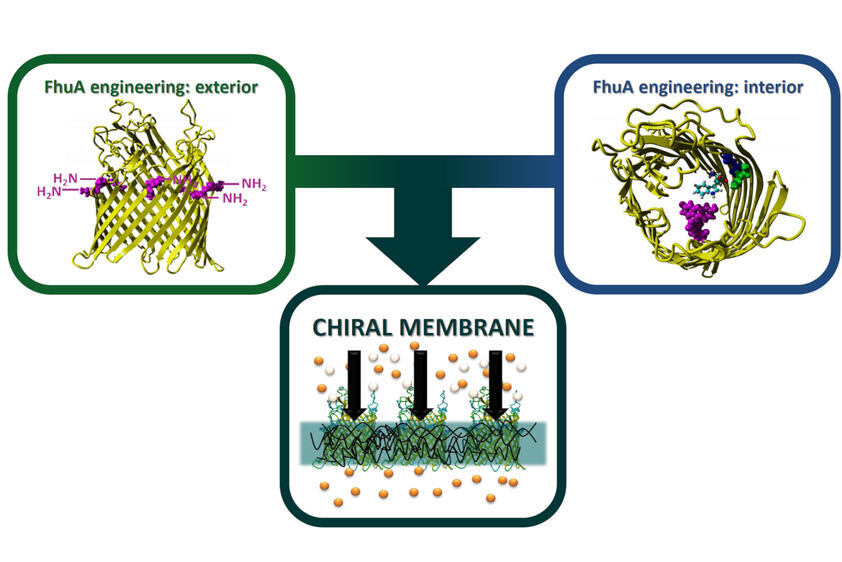 In order to obtain the structural information, the project will be complemented by the expertise of the group of Prof. Groth from the Heinrich-Heine University of Düsseldorf and from of the group of Prof. Fitter from RWTH Aachen in its second phase. The Groth group investigates the structure of the channel protein variants by X-ray crystallography. The expertise of the Fitter group comprises fluorescence spectroscopy, which uses time-resolved fluorescence anisotropy measurements to study the dynamics of bound fluorescence molecules. Designing chiral membrane filters by means of protein engineering is a complex and challenging task and will explore new scientific frontiers.

Patents and Publications from the first phase of the project