You Are Here: Chemogenetic Evolution of a Peroxidase-like Artificial Metalloenzyme

Artificial metalloenzymes consist of a synthetic cofactor embedded in a protein scaffold and thus provide a clean slate for directed evolution studies. Here, the design and directed evolution of an artificial metalloenzyme with peroxidase-like properties was reported. Based on the nitrobindin variant NB4, different porphyrin derivatives were screened in the first round of our chemogenetic evolution campaign. After identifying MnPPIX as the most suitable cofactor, two further rounds of directed evolution increased the enzyme’s activity to levels on par with some natural peroxidases. The introduction of an arginine residue in a position distal to the cofactor was responsible for the increased activity. Furthermore, the NB4 environment resulted in a more flexible distal arginine compared to the respective wildtype-derived variant. The evolved artificial enzyme efficiently oxidized common redox mediators (ABTS, syringaldehyde, and 2,6-dimethoxyphenol) and readily decolorized three recalcitrant dyes (indigo carmine, reactive blue 19, and reactive black 5). Finally, the recycling of the artificial enzyme was demonstrated.

To learn more, please access the full paper on Publications and patents and 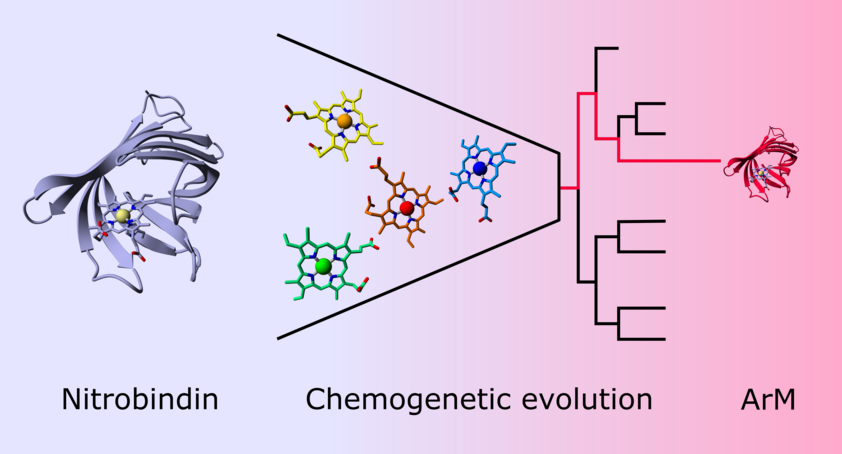