You Are Here: A colourimetric high-throughput screening system for directed evolution of prodigiosin ligase PigC 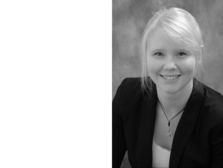 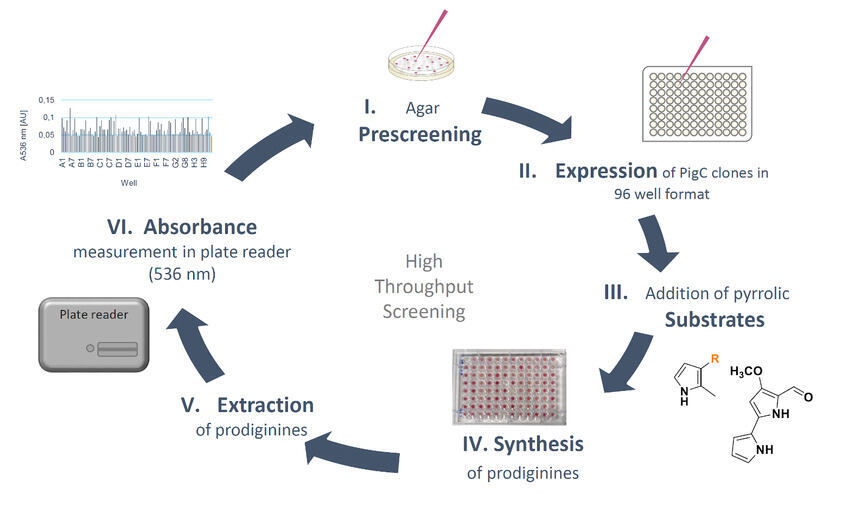 Copyright: © Chem. Commun. Red and active colonies are preselected to be screened photometrically in 96-well format.

Prodigiosin synthetase PigC is a membrane bound ATP-ligase that catalyses the final condensation step in the biosynthesis pathway of the natural product prodigiosin, a tripyrrolic red pigment, which occurs naturally in several bacterial species. The compound class of prodiginines is famous for their prominent colour, which makes colonies of prodiginine-producing bacteria appear like little droplets of blood. Several prodiginine bioactivities have so far been discovered, which moved the compounds into the focus of industry: One artificial prodiginine derivative, Obatoclax Mesylate GX15-070, is currently on phase II clinical trials as candidate drug to treat different forms of cancer.

As chemical synthesis of prodiginines unfortunately is not trivial, biocatalysis remains a promising approach to get the compounds into hand. In our PigC screening assay, we combined chemical synthesis of prodiginine precursors (colourless in solution) with PigC biocatalysis (during which the red prodiginines are formed). In an agar prescreening, red and active colonies are selected for expression in 96-well format, where pyrrolic precursors are supplemented and prodiginines finally extracted and photometrically quantified by their red colour.

This concept makes the exchange of a pyrrolic precursor by a more promising pyrrole derivative easy: we screened with 2,3-dimethyl pyrrole instead of the natural PigC substrate 2-methyl-3-amyl pyrrole, as short-chain prodiginines have shown an increased bioactivity in anticancer autophagy tests. As 2,3-dimethyl pyrrole is not readily accepted by PigC, enzyme engineering campaigns on PigC are required to extend the synthetase’s substrate scope. This is where a suitable high-throughput screening method for detection of beneficial PigC variants comes into action: a PigC random mutagenesis library was generated in Pseudomonas putida KT2440 and screened for PigC variants with enhanced acceptance of the prodiginine precursor. After screening of approximately 3000 clones, a variant with one amino acid exchange in the substrate-binding domain stood out with a nearly 3-fold increased prodiginine yield. The variant’s catalytic efficiency with 2,3-dimethyl pyrrole (K M/k cat) proofed to be 2.9-fold higher over the wild type, and also its stability at 30°C was slightly increased, which enabled the production of higher amount of prodiginines in the screening assay.

This paper was written in the division Molecular Bioeconomy. The scientific activities of the Bioeconomy Science Center were financially supported by the Ministry of Culture and Science within the framework of the NRW Strategieprojekt BioSC (No. 313/323-400-00213).