You Are Here: Ultra-high-throughput screening system for directed evolution of polymer binding peptides

Congratulations to Lina Apitius on her recent Publication! 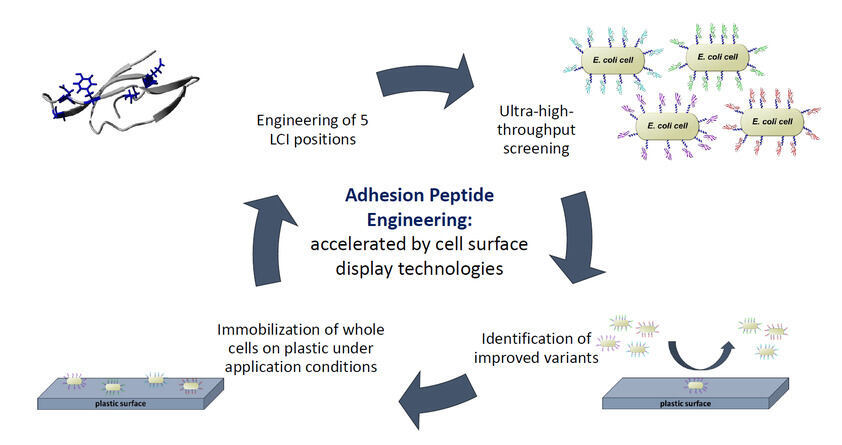 A great challenge of the Anthropocene era will be the reduction and prevention of accumulated plastics in the environment. One possibility to reduce plastic waste in the environment is an enzymatic degradation. In order to bring microorganisms that release polymer-degrading enzymes into close distance to the polymer particles, an adhesion promoter is needed. Anchor peptides fulfill these requirements and enable a targeted immobilization of whole cells on polymer surfaces. An esterase A-based Escherichia coli cell surface display screening system was developed, that enabled directed evolution of anchor peptides for improved binding strength to polymers. The ultra-high-throughput screening system allowed an enrichment of improved LCI variants from a culture broth by an immobilization of whole cells on polypropylene beads. The polypropylene binding peptide LCI was diversified by a simultaneous saturation of five positions, whereby theoretically 3.2 million variants could be generated. Applying the cell surface display system, the generated LCI diversity was analyzed by screening in total 10 million clones. LCI was screened for an improved binding to polypropylene beads in presence of the surfactant sodium dodecylbenzenesulfonate. Identified LCI variants revealed an up to 12-fold improved polypropylene-binding strength in presence of 0.125 mM sodium dodecylbenzenesulfonate. The cell surface display system is a first whole-cell ultra-high-throughput screening system to improve anchor peptides. Improved adhesion peptides can be used to direct and to immobilize organisms specifically to polymer surfaces, like polypropylene, and open up novel applications, for example, in a targeted plastic degradation.

This work was realized in the division Biohybrid Systems and it was funded by Arbeitsgemeinschaft industrieller Forschungsvereinigungen (IGF-Vorhaben 18180 N) as well as FuPol (Funktionalisierung von Polymeren), the German Federal Ministry of Education and Research (BMBF) [FKZ: 031A227F].