The division Hybrid Catalysis & High Throughput Screening aims to advance the fields of hybrid catalysis, high-throughput screening and combining both expertise to evolve hybrid catalysts. Hybrid catalysts are metal catalysts that are embedded in a protein environment and bridge the synthetic worlds of biocatalysis (unique reaction control through specific positioning of substrates within the protein) and metal catalysis. The targeted hybrid catalysts can perform synthetically important reactions which are for instance “unknown to naturally occurring enzymes” (e.g. metathesis reaction; nobel price 2005)1-3. The metal catalysts are synthesized by the collaborators Prof. Okuda & Prof. Herres-Pawlis at RWTH Aachen and Prof. Hayashi & Prof. Onoda at Osaka University. 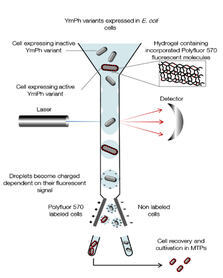 In the HTS division as highlight a high throughput screening platform for hydrolases (lipase, cellulase, esterase, phytase) was developed which enables by flow cytometry to efficiently screen millions of variants per hour6-8. The Fur-Shell termed platform yielded up 14-fold improved enzymes variants in a single round of evolution (significantly more that the 1.5-2.5-fold activity improvement usually obtained in a traditional round of directed evolution). The Fur-Shell screening principle is based on a coupled enzymatic polymerization reactions (polyester formation with a copolymerized fluorophore) which generates in presence of an active hydrolase variant glucose which is further converted by glucose oxidase to yield H2O2 which initiates in presence of Fe2+ the generation of a fluorescent-hydrogel-layer on the surface of E. coli cells. 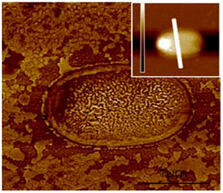 The developed strategies in the division Hybrid Catalysis & High Throughput Screening support the core expertise of the institute by advancing methodologies for directed enzyme evolution (e.g. enables the efficient screening OmniChange libraries and random mutant libraries), e.g. by identifying a higher number of beneficial position that contribute to property improvements and to achieve significantly higher improvements per round of directed evolution.