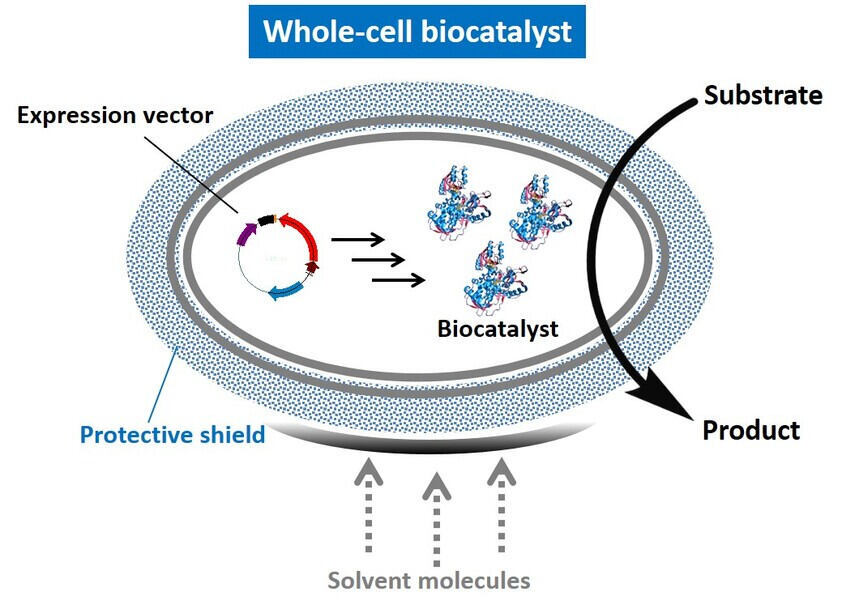 In today’s industrial environment, the production of carbon-based chemicals is still dominated by traditional chemical processes. Biotechnological processes still make up less than 20% of specialty and bulk chemical branches and less than 15% of polymer production, which forms by far the largest market in the chemical industry. Biocatalytic processes are seminal technologies deemed more sustainable and environmentally friendly than chemical processes. Further, biocatalysts exhibit natural or imprinted selectivities unmatched by chemical catalysts, thereby affording stereoselective transformations and the production of enantiomerically pure preparations unobtainable or difficult to achieve by traditional chemistry. In some cases, such biocatalytic processes could substantially decrease energy demands and the production of unwanted or toxic by-products. However, certain hurdles need to be overcome on the road towards replacement of traditional chemical synthesis routes by biotechnological processes.

One aspect is economic viability, which is often a critical issue when advances in “white” biotechnology compete with long established and highly effective, yet fossil fuel dependent chemical processes. To increase the effectiveness of processes by improving space-time yields and downstream processing, biotransformations could substantially benefit when the flexibilities provided by organic chemistry could be adopted. For example, chemical synthesis routes are usually characterized by immense flexibilities regarding physical parameters and solvents. Life on earth evolved in aqueous environments, which makes water a crucial requirement for all biological processes. This means that bioconversions using living cells or isolated enzymes in unconventional reaction media such as aqueous systems mixed with organic co-solvents or even entirely anhydrous systems are still rather unusual. A common effect of hydrophobic solvent molecules on living cells is the penetration and destruction of biological membranes eventually leading to cell lysis. In turn, free enzymes crucially require aqueous environments to retain their three-dimensional structure. Organic solvent molecules often impose structural damage and activity loss, which in some cases can be curbed, yet usually not entirely prevented, by enzyme stabilization and immobilization techniques.

In Hyka-synBio, we aim to combine the advantages of organic chemistry and biocatalysis to generate bioconversion systems capable of high-yield stereoselective synthesis routes under mild reaction conditions in unconventional media. Specifically, we will design protective shields around covering living cells, an approach reminiscent of natural biofilms. Different polymers will be employed and designed that will provide the characteristics of hydrogels, and the latter will then be adhered or immobilized on the cell surface. It is envisaged that the synthetic biofilms will protect the cells from the toxic effect of organic solvent molecules while ensuring sufficient transport of hydrophobic compounds across the film to the catalytic compartment. We employ two kinds of biocatalytic systems for stereoselective transformations.

The first system makes use of cytochrome P450 monooxygenase BM3 variants previously generated in the Schwaneberg group. These enzymes are produced in the cytosol of hydrogel-decorated microorganisms, where regioselective hydroxylations of hydrophobic compounds delivered by the extracellular medium will be carried out. The compounds thus obtained are important building blocks for the pharmaceutical industry, and the reactions thus employed are regioselectively almost impossible to achieve using chemical synthesis. The second system employs artificial metalloenzymes for the stereoselective synthesis of a broad spectrum of chemicals belonging to the four abovementioned chemical branches, namely fine, specialty and bulk chemicals as well as polymers. Following the design and construction of these artificial metalloenzymes, enzyme engineering will be employed to tailor the novel catalysts towards higher activity, regio- or enantioselectivity and robustness in unconventional reaction media.

Hyka-synBio employs the expertise of Professor Andrij Pich from the DWI Leibniz Institute for Interactive Materials, who can look back at many years of experience in the field of biohybrid microgel design, and Professor Jun Okuda from the Chair of Organometallic Chemistry at the RWTH Aachen, who is an expert in the field of organometallic and biohybrid catalysis. The Schwaneberg group maintains very successful long-term collaborations with both groups. Hyka-synBio is part of the BMBF Initiative Biotechnology 2020+, among which Professor Schwaneberg has received the BMBF research award in the field of “Next Generation of Biotechnological Processes". In total three PhDs fellows, one chemical Post-Doc and the division head Dr. Johannes Schiffels are directly involved in the project, which is fully funded for four years.

In Hyka-synBio, we team up with…