An enzymatic route to α-tocopherol synthons: Aromatic hydroxylation of pseudocumene and mesitylene with P450 BM3 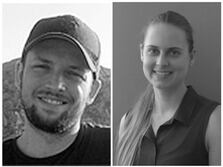 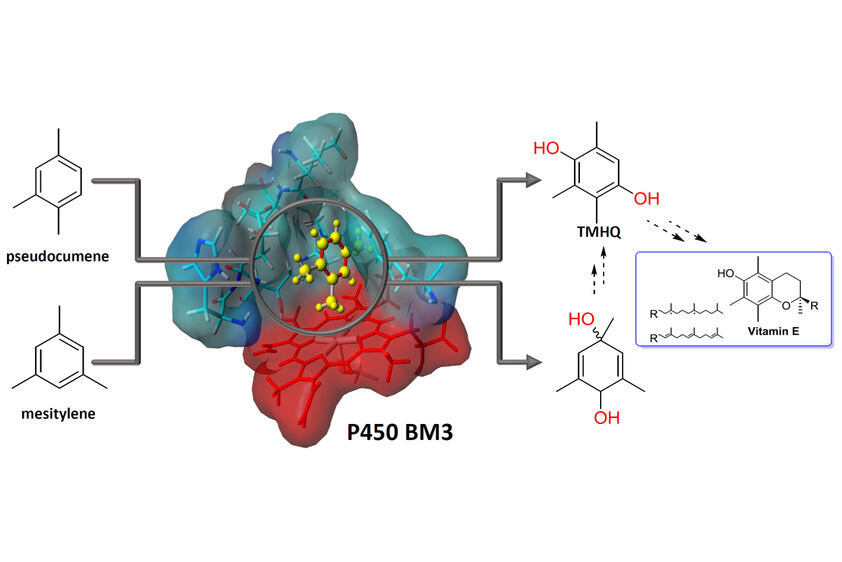 Alternative enzymatic routes for vitamin E synthesis are important to match increasing demands. Here, we show the first direct aromatic hydroxylation of pseudocumene and mesitylene in water, with O2 and under mild reaction conditions to access five key phenolic α -tocopherol synthons including a direct route to trimethylhydroquinone, TMHQ. The P450 BM3 wild-type catalyzed a 94% selective aromatic hydroxylation of mesitylene, whereas pseudocumene was hydroxylated to a large extent ranging from 46-64% on benzylic positions. Site-saturation mutagenesis generated a new P450 BM3 mutant, named “variant M3”, with a 3 to 8fold increased coupling efficiency and 75 to 230-fold increased activity for pseudocumene and mesitylene conversion. Additional π - π interactions introduced by mutation A330F improved not only productivity and coupling efficiency, but also a 61 to 75% selectivity toward aromatic hydroxylation of pseudocumene. Detailed product pattern analysis, substrate docking and mechanistic considerations support the hypothesis that pseudocumene binds in an inverted orientation in the active site of P450 BM3 WT as compared to P450 BM3 variant M3 to allow this change in chemo-selectivity.

Under continuous NADPH-recycling the novel P450 BM3 variant M3 was able to produce the key tocopherol precursor TMHQ at 35% selectivity at concentrations up to 0.18 mg ml-1 directly from pseudocumene, which is a significant step toward more sustainable synthesis of vitamin E. The reaction can be performed in one-pot without the need for intermediate purification or additional catalysts. In case of mesitylene over-oxidation leads to dearomatization and formation of a valuable p-quinol synthon that can directly serve as educt for synthesis of TMHQ. This study provides an enzymatic route to key phenolic synthons for α-tocopherols and first catalytic and mechanistic insights into direct aromatic hydroxylation and dearomatization of trimethylbenzenes with O2.

Biocatalysis with cytochrome P450 enzymes are important for the industrial production of fine chemicals, pharmaceuticals, fragrance and flavor compounds since chemoselective hydroxylation of aromatics and terpenes are chemically difficult to achieve. A few P450 based industrial processes have been developed based on whole cell catalysis. However, the outer membrane of microbial cells forms an effective barrier, which reduces the uptake of hydrophobic substrates. The coexpression of outer membrane proteins in E. coli such as the ferric hydroxamate uptake protein named FhuA can provide alternative solutions to chemical or physical methods for increasing compound flux through the outer membrane of E. coli and thereby to boost productivities. In this study we employed an engineered FhuA Δ1-160 variant in which the “cork domain” was removed (first 160 residues are deleted); FhuA Δ1-160 has a cross-section of 39–46 Å with a “free” inner diameter of about 14 Å that serves as passive diffusion channel. FhuA WT and Δ1-160 were coexpressed on a bicistronic system with two P450 BM3 variants for regiospecific hydroxylation of aromatic compounds toluene and anisole as well as for oxidation of two terpenes (α)-pinene and (R)-(+)-limonene. The presence of FhuA Δ1‐160 resulted in a doubled product concentration for toluene (35 μ to 50 μM), anisole (25 μM to 45 μM), pinene (12 μM to 20 μM) and limonene (12 μM to 25 μM) and five times higher for the coumarin derivative BCCE. In order to characterizes and compensate for expression variations a quantification method based on Chromeo546-labled StrepTactinII was developed to quantify the number of FhuA Δ1-160 in the outer E. coli membrane (∼44000 of FhuA Δ1-160 per cell). Morphology studies showed that a 6% E. coli surface coverage can be achieved with FhuA Δ1‐160 without significantly influencing the E. coli rod shape. In summary, FhuA Δ1-160 efficiently increases uptake of hydrophobic aromatics and terpenes for whole-cell biotransformations and can likely be used for other enzymes and/or substrates.

A novel whole cell cascade for double oxidation of cyclooctane to cyclooctanone was developed. The one-pot oxidation cascade requires only a minimum of reaction components: resting E. coli cells in aqueous buffered medium (=catalyst), the target substrate and oxygen as environmental friendly oxidant. Conversion of cyclooctane was catalysed with high efficiency (50% yield) and excellent selectivity (>94%) to cyclooctanone. The reported oxidation cascade represents a novel whole cell system for double oxidation of non-activated alkanes including an integrated cofactor regeneration. Notably, two alcohol dehydrogenases from Lactobacillus brevis and from Rhodococcus erythropolis with opposite cofactor selectivities and one monooxygenase P450 BM3 were produced in a coexpression system in one single host. The system represents the most efficient route with a TTN of up to 24363 being a promising process in terms of sustainability as well.

Re-engineering of proteins by directed evolution is a standard approach for tailoring enzymes in science and industry. Diversity generation strategies in directed enzyme evolution can be divided in: (a) focused mutagenesis - specific residues are randomized; (b) random mutagenesis - mutations are randomly introduced over the whole gene; and (c) gene recombination - different genes are fragmented and recombined with each other in either a random or rational manner. Each method has advantages and limitations that are depended on the targeted enzymes and desired properties. In the review “To get what we aim for: progress in diversity generation methods” we summarize and discuss methodological advancements and novel concepts in diversity generation for all three formats since 2009. Improvements are discussed in respect to the state of the art in diversity generation and high-throughput screening, as well as robustness and simplicity in use. Furthermore, limitations and remaining challenges are emphasized ‘to get what we aim for’ through ‘optimal diversity’ generation.

The monooxygenase P450 BM3 from Bacillus megaterium was studied for the aromatic hydroxylation of monosubstituted benzenes. Notably, the direct hydroxylation of the selected aromatic compounds by P450 BM3 occurred with atmospheric oxygen at room temperature and in water. After two rounds of evolution by site saturation mutagenesis the highly improved P450 BM3 variant M2 (R47S/Y51W/I401M) was found to catalyze the specific o-hydroxylation of several monosubstituted benzenes. The halogenated aromatics were found to be hydroxylated with up to 10-fold increased turnover rates compared to P450 BM3 wild type and excellent regioselectivity of 99 % was achieved. 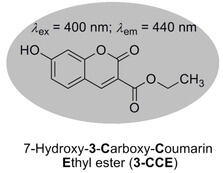 Flow cytometry based screening systems have successfully been used in directed evolution experiments. Herein, we report the first whole cell ultra-high throughput screening platform for P450 monooxygenases based on flow cytometry. O-dealkylation of 7-benzoxy-3-carboxy-coumarin ethyl ester BCCE by P450 BM3 generates a fluorescence coumarin derivative. After one round of directed evolution, P450 BM3 variants with up to 7-fold increased activity, P450 M3 DM-1: R255H, could be identified after sampling 1.25 109 cells. The reported ultra-high throughput screening platform can likely applied to directed evolution campaigns of any P450 monooxygenase that catalyzes the O-dealkylation of BCCE.

Construction of fusion proteins is a widely employed approach, especially for multi-component enzymes such as cytochrome P450s. A novel method for generating fusion proteins with variable linker length, P-LinK-Protein fusion with variable linker insertion, was developed and validated by fusing P450cin monooxygenase CinA to the flavodoxin shuttle protein CinC. CinC was fused to the C-terminal end of CinA through a linker with sixteen different lengths in a single experiment employing three PCRs. Screening for 2-β-hydroxy-1,8-cineole production by CinA-CinC fusions revealed that active variants had a linker length of more than 5 amino acids and an optimum was reached at a linker length of 10 amino acids. The developed P-LinK method minimizes experimental efforts and reduces significantly time demands; P-LinK requires a single cloning and transformation step for generating multiple linker variants, 1 to 16 amino acids, and is therefore technically simple and robust. Generation of functional fusion proteins with an optimal linker length is highly attractive for the whole field of P450 biocatalysis in order to increase product titers and specific activities of monooxygenases.

By using one-pot reactions in biocatalysis for synthesis of chemical building blocks the purification of intermediates is redundant and downstream processing can be reduced. Herein the first double oxidation of n-heptane to produce chiral alcohols and heptanones by whole cells is described. By using an operon-fusion the coexpression of the monooxygenase P450 BM3 from Bacillus megaterium and the alcohol dehydrogenase RE-ADH from Rhodococcus erythropolis is performed. An improved in situ cofactor regeneration could be achieved by coupling to glucose oxidation in E. coli. Compared to previously reported values for in vitro oxidation cascades a 3-fold higher product formation could be detected. The ee reached values of >99 % for (S)-3-heptanol. All heptanol isomers were obtained by additional coexpression of an alcohol dehydrogenase from Lactobacillus brevis Lb-ADH in the same host. Coexpression of another ADH allowed utilization of both cofactors NADH and NADPH in the host cell. 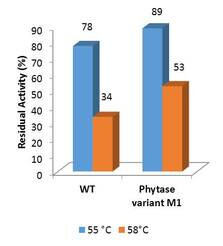 The nutritional quality of phytate rich diets e.g., cereal grains, oilseeds of monogastric animals like pigs is in general improved by the addition of phytases to the feed. Phytases degrade indigestible phytate myo-inositol 1,2,3,4,5,6-hexakis dihydrogen phosphate to lower inositol phosphates and inorganic phosphate. The phosphate is taken up by the animals and no insoluble phytate-mineral complexes, which have an anti-nutritional effect are formed. In the past different directed evolution methods were applied to improve phytases from different origins in respect to industrial relevant properties such as high thermostability for the pelleting process or high specific activities. In the study “Directed evolution of a highly active Yersinia mollaretii phytase” we report the cloning, characterization, and directed evolution of the Yersinia mollaretii phytase Ymphytase. The Ymphytase has a specific activity of 1,073 U/mg which is ~10 times higher than widely used fungal phytases. High-throughput prescreening methods using filter papers or 384-well microtiter plates were developed. Precise subsequent screening for thermostable and active phytase variants was performed by combining absorbance and fluorescence-based detection system in 96-well microtiter plates. After screening of the complete mutant library generated via sequence saturation mutagenesis SeSaM, a phytase variant with ∼20% improved thermostability at 58°C for 20 min; residual activity wild type ∼34%; variant ∼53%, and increased melting temperature of 1.5°C with a slight loss of specific activity was identified. 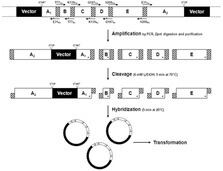 Focused mutant library generation methods have been developed to improve mainly ‘‘localizable’’ enzyme properties such as activity and selectivity. Current multi-site saturation methods are restricted by the gene sequence, require subsequent PCR steps and/or additional enzymatic modifications. Here we report, a multiple site saturation mutagenesis method, OmniChange, which simultaneously and efficiently saturates five independent codons. As proof of principle, five chemically cleaved DNA fragments, each carrying one NNK-degenerated codon, were generated and assembled to full gene length in a one-pot-reaction without additional PCR-amplification or use of restriction enzymes or ligases. Sequencing revealed the presence of up to 27 different codons at individual positions, corresponding to 84.4% of the theoretical diversity offered by NNK-degeneration. OmniChange is absolutely sequence independent, does not require a minimal distance between mutated codons and can be accomplished within a day.