CompassR: A new rule for recombination of beneficial substitutions in directed evolution

The Computer-assisted Recombination – CompassR – strategy is a selection filter for experimentalists to recombine beneficial substitutions in order to gradually improve enzyme performance and maximize improvements through recombination. 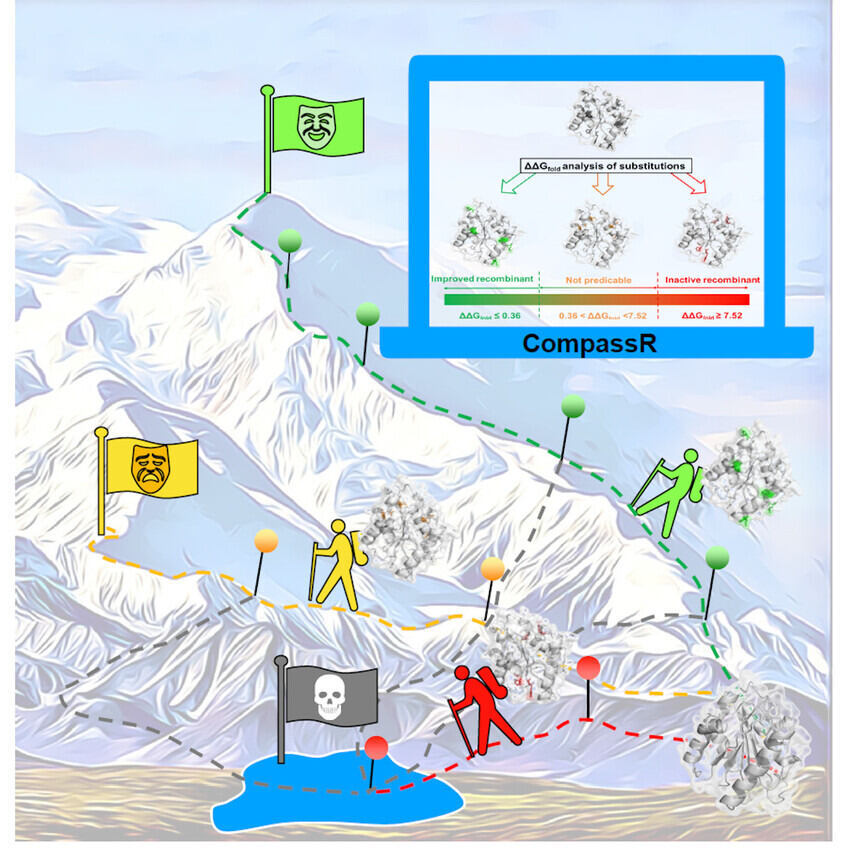 Copyright: © Chem.: Eur. J. CompassR works through the analysis of the relative free energy of folding and essentially acts as recombination pathfinder app for recombing beneficical substitutions that have been identified by directed evolution and/or computational design.

This work was realized in the division Computational Biology and was supported by computing resources granted by JARA-HPC from RWTH Aachen University (JARA0187). Haiyang Cui is financially supported by the China Scholarship Council (CSC) scholarship.

A general protein engineering strategy was suggested through molecular understanding of enzyme and ionic liquid interactions based on computational study. 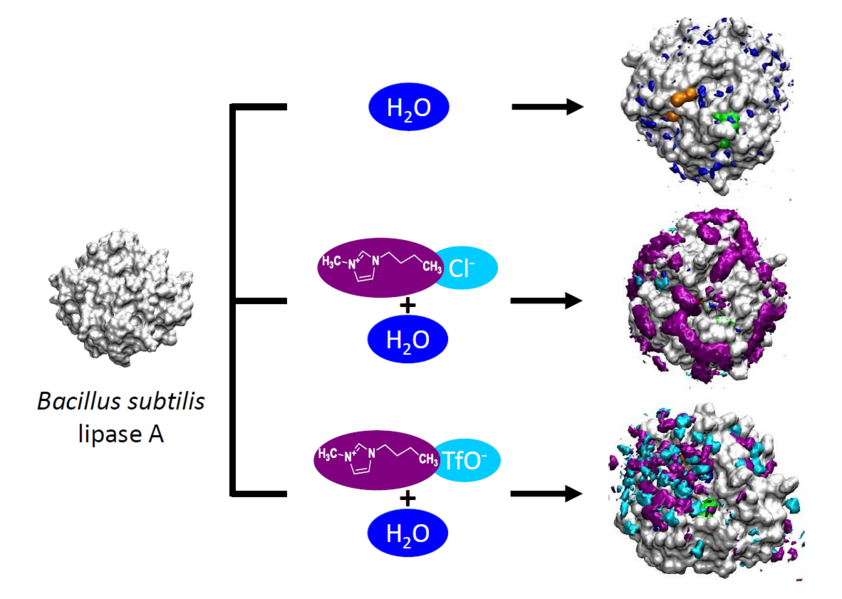 In this publication, interactions between Bacillus subtilis lipase A (BSLA) and four imidazolium-based ionic liquids were studied using molecular dynamic simulations. This study provides first insight that ionic liquids co-solvents do not alter the overall and local BSLA conformation. The effect on the reduction of activity was attributed to surface interactions of the ionic liquid cations, which removed essential water molecules from the BSLA surface.Furthermore, the comparison of simulation results with experimental full site-saturation mutagenesis BSLA libraries confirmed that most of beneficial positions for resistance improvement are located at the ionic liquid cations binding regions. Taken together, these findings suggest that surface charge engineering might be a general protein engineering strategy to improve BSLA resistance in ionic liquids and is most likely applicable to other lipases and α/β-hydrolases.

This work was realized in the division of Computational Biology and was supported by computing resources granted by JARA-HPC from RWTH Aachen University (JARA0187).

In the present publication, a molecular understanding was reported on polyelectrolyte-enzyme complexes which boost enzymatic activity in multi-component systems. 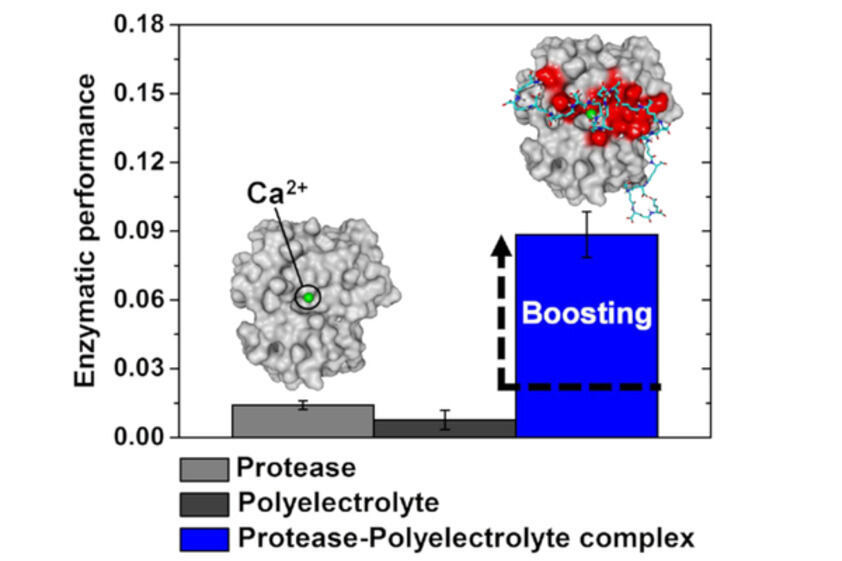 Copyright: © ACS Boosting the catalytic performance of protease 1ST3 through the interaction of polyelectrolytes on surface amino acid residues close to the Ca2+ binding site of the protease.

In this publication, a molecular understanding of the boosting effect of polyacrylic acid -PAA-) and poly-L-γ-glutamic acid -γ-PGA- for a nonspecific subtilisin protease was generated through biophysical characterization, e.g. fluorescence correlation and circular dichroism spectroscopies, isothermal titration calorimetry, molecular dynamics simulations and protease reengineering, e.g. site-saturation mutagenesis. This study revealed that enthalpically driven interactions via key amino acid residues close to the protease Ca2+ binding sites cause the boosting effect in protease activity. On the molecular level electrostatic interactions result in the formation of protease-polyelectrolyte complexes. Site-saturation mutagenesis on 6 positions yielded an increased proteolytic performance against a complex protein mixture -trademark CO3; up to ~300% and ~70%- in the presence of PAA and γ-PGA. Being able to fine-tune interactions between proteins and negatively charged polymers through integrative use of computational design, protein reengineering and biophysical characterization proved to be an efficient workflow to improve protease performance.

This research was partially funded by Henkel AG & Co. KGaA, Düsseldorf, Germany, as part of the Henkel Innovation Campus for Advanced Sustainable Technologies -HICAST- project. Simulations were performed with computing resources granted by JARA-HPC from RWTH Aachen University under projects RWTH0116 and JARA0169.

In the present publication, a discovery of nanoreactors from electrostatically bridged like-charged surfactants and polyelectrolytes was reported. Incorporation of a protease into such dynamic nanoreactors results in a synergistically enhanced cleaning performance due to the improved solubilization accessibility for the protease through the interaction with the nanoreactors. 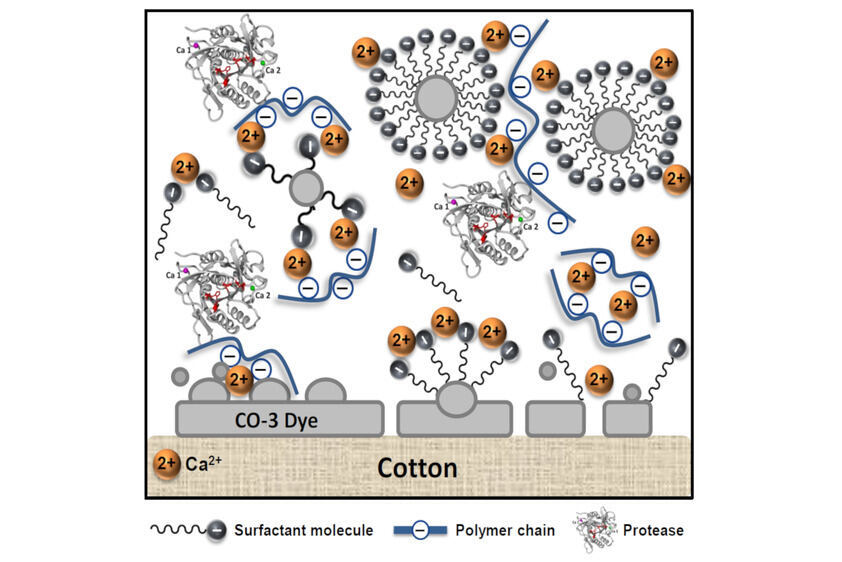 Image: Scheme of an unanticipated mechanism of attractive electrostatic interactions of fully neutralized polyacrylic acid (PAA) with like-charged surfactant SLES. Amphiphilic polymer-surfactant complexes with high interfacial activity and solubilization capacity are formed by bridging with Ca2+ ions. Incorporation of a protease into such dynamic nanoreactors results in an enhanced cleaning performance because of the improved solubilization of poorly water-soluble immobilized proteins.

This research was partially funded by Henkel AG & Co. KGaA, Düsseldorf, Germany, as part of the Henkel Innovation Campus for Advanced Sustainable Technologies (HICAST). Simulations were performed with computing resources granted by JARA-HPC from RWTH Aachen University under projects RWTH0116 and JARA0169. L.A.T. acknowledges financial support by the Russian Foundation for Basic Research (RFBR) according to the research project No 18-53-76005. 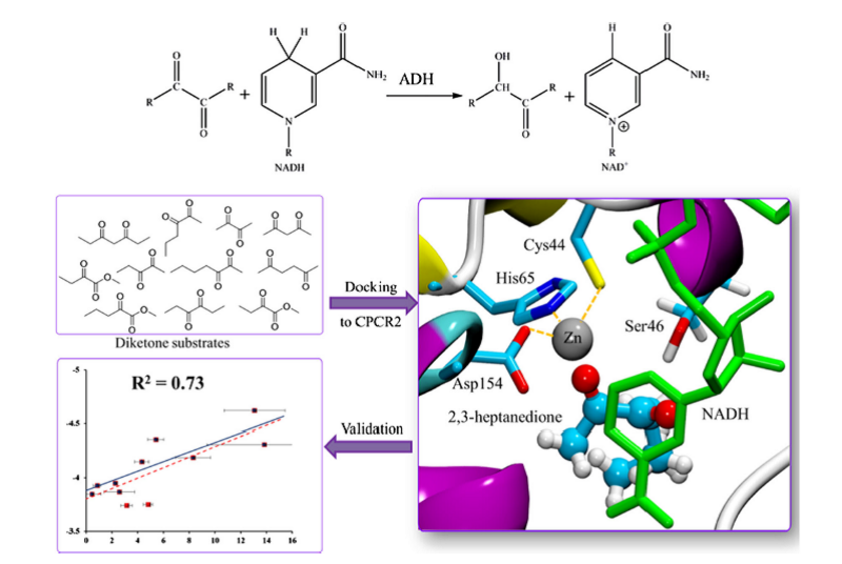 Molecular docking of substrates is more challenging compared to inhibitors as the reaction mechanism has to be considered. This becomes more pronounced for zinc-dependent enzymes since the coordination state of the catalytic zinc ion is of greater importance. In order to develop a predictive substrate docking protocol, we have performed molecular docking studies of diketone substrates using the catalytic state of carbonyl reductase 2 from Candida parapsilosis CPCR2. Different docking protocols using two docking methods, AutoDock Vina and AutoDock4.2, with two different sets of atomic charges, AM1-BCC and HF-RESP, for catalytic zinc environment and substrates as well as two sets of vdW parameters for zinc ion were examined. We have selected the catalytic binding pose of each substrate by applying mechanism based distance criteria. To compare the performance of the docking protocols, the correlation plots for the binding energies of these catalytic poses were obtained against experimental Vmax values of the 11 diketone substrates for CPCR2. The best correlation of 0.73 was achieved with AutoDock4.2 while treating catalytic zinc ion in optimized non-bonded NBopt state with ?1.01 charge on the zinc ion, compared to 0.36 in non-bonded - ?2.00 charge on the zinc ion - state. These results indicate the importance of catalytic constraints and charge parameterization of catalytic zinc environment for the prediction of substrate activity in zinc-dependent enzymes by molecular docking. The developed predictive docking protocol described here is in principle generally applicable for the efficient in silico substrate spectra characterization of zinc-dependent ADH. 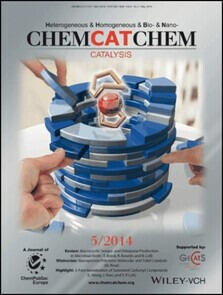 Rhodium-Complex-Linked Hybrid Biocatalyst:
Stereo-Controlled Phenylacetylene Polymerization within an Engineered Protein Cavity The incorporation of a Rh complex with a maleimide moiety into the cavity of the nitrobindin b-barrel scaffold by a covalent linkage at the 96-position (Cys) provides a hybrid biocatalyst that promotes the polymerization of phenylacetylene.

The appropriate structural optimization of the cavity by mutagenesis enhances the stereoselectivity of the polymer with a trans content of 82% at 258C and pH 8.0. The X-ray crystal structure of one of the hybrid biocatalysts at a resolution of 2.0 reveals that the Rh complex is located in the b-barrel cavity without any perturbation to the total protein structure.

Crystal structure analysis and molecular modeling support the fact that the stereoselectivity is enhanced by the effective control of monomer access to the Rh complex within the limited space of the protein cavity. 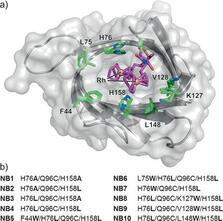 Overview of the ten generated NB variants. a) The amino acid residues in the vicinity of the Rh complex within NB(Q96C)-Rh. Two calculated stable conformations of the Rh complex are shown. The Rh atom and its ligand are represented by pink and purple sticks, respectively. Met75 and Met148 were replaced by Leu in all variants. b) List of re-engineered NB variants for stereoselective PPA synthesis.

Copyright: © Bio VI Solved crystal structures of P450 BM3 variants in complex with styrene provide on the molecular level a first explanation of how a positively charged surface residue inverts the enantiopreference of styrene epoxidation.

Substitution of Lys/Arg for Ala in 5F5K StB and 5F5R StB structures establishes a salt-bridge between Lys/Arg184 - F-helix, and Asp80 - B’-helix.

Due to kinked I-helix, Ala264 covers completely the heme pyrrole ring C, and provides sufficient steric hindrance to prevent exposure of the pro-S face of styrene to the heme-iron which, as a result, promotes the formation of R-styrene epoxide as the preferred enantiomer in the 5F5 variant.