You Are Here: Enzyme Hydration Determines Resistance in Organic Cosolvents

Organic solvents (OSs) are attractive in biocatalysis as they offer numerous advantages, such as increased solubility of substrates/products or suppression of side reactions. However, the use of enzymes in OSs often correlates with enzyme deactivation or a dramatic drop in catalytic activity. In this study, we have developed a comprehensive understanding of enzymes and OSs interactions based on 35 observables obtained from molecular dynamics simulation of 32 resistant and nonresistant Bacillus subtilis lipase A (BSLA) variants (wild type, single, and multiple substitutions) towards an organic cosolvent (12 % (v/v) TFE). Detailed analysis of the distribution of these structural and dynamics observables uncovered that increased enzyme surface hydration of substituted sites as the predominant factor to drive the improved resistance in OS. Furthermore, the iterative recombination of four surface substitutions revealed that the extent of hydration in BSLA variants correlates strongly with its OS resistance (R² = 0.91). Remarkably, the recombination of substitutions led to a highly resistant BSLA variant (I12R/M137H/N166E) with a 7.8-fold improved resistance in 12 % (v/v) TFE, while retaining comparable catalytic activity (~92%) compared to wild type. Our findings confirm that strengthening protein surface hydration via surface charge engineering is an effective and efficient rational strategy for tailoring of enzyme stability in OSs.

Haiyang Cui is financially supported by the China Scholarship Council (CSC) scholarship. This work was realized in the division Computational Biology and was supported by computing resources granted by JARA-HPC from RWTH Aachen University (JARA0169 and JARA0187).

To learn more, please access the full paper on Publications and patents and 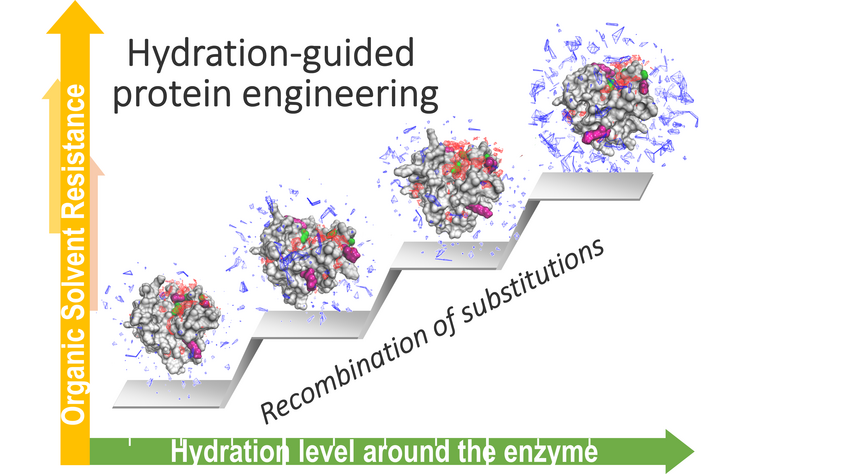